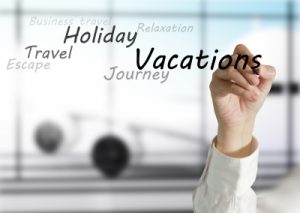 An interesting case on the vacation policy issue has been ruled earlier this year by the court of appeal. Employees brought a class action suit against their employer claiming that the vacation policy that required them to work for at least one year before their right to vacation vested was illegal. The appellate court affirmed the dismissal of this case holding that the employer’s policy was not illegal, because it specifically provided that vacation pay was not earned during the first year of employment. The employees in this case claimed that the employer intentionally withheld their vested vacation pay.

The appellate court rejected Plaintiff’s argument finding that it was neither illegal not inconsistent with the existing law to impose a waiting period before entitlement to vacation pay vests. Minnick v Automotive Creations, Inc. 13 Cal.App.5th 2000 (2017). The court further emphasized that imposing a waiting time period before allowing vacation to accrue is not the same as taking away vacation which has already been earned / vested (the latter would indeed be illegal). The Minnick case also makes it clear that the language of the vacation policy is critical, and it must clearly state that vacation is not accrued until a certain period passes in order to be legal.