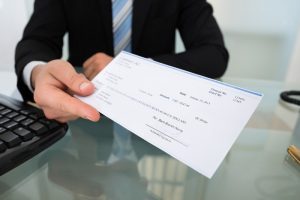 First, an employee’s failure to repay his relocation bonus or his failure to honor some other part of your employment agreement is legally not a defense to the legal requirement of paying all wages. A number of laws mandate upon employers to promptly pay all wages due to employees and prohibit taking improper deductions from paychecks except as authorized by law. Further, it has been held that an employer may not set off debts a terminated employee owes the employer against wages due to that employee. Barnhill v Robert Sunders & Co. (1981).

Secondly, when you don’t pay the wages due to an employee, you may be liable not only for the wages unpaid, but also for penalties, interest, and possibly – that employee’s legal fees, if he decides to pursue his claim for unpaid wages in court as a single claim or along with other claims (i.e. wrongful termination, discrimination, retaliation, etc…). This can be especially costly and not worth the risk in a situation where an employee is a high-wage earner, who received a relatively modest relocation bonus, as it may result in much greater liability for waiting time penalties (up to 30 days of that employee’s ordinary wages). To illustrate, imagine the following scenario: you hire a worker at a rate of pay of $800/day after issuing him $10,000 as a relocation bonus to be repaid, if the employee quits or is fired for cause before his one-year anniversary of employment with you. That employee resigns three months later.  You refuse to issue his final paycheck until he repays his relocation bonus. That employee waits for a month and then files a claim for unpaid wage with the Department of Labor. He will then be entitled to his unpaid wages for two weeks plus up to $24,000(!) in waiting time penalties ($800 x 30 days as per California Labor Code 203). That employee then repays you relocation bonus, ending up receiving a total of $14,000 more from you than he should have and otherwise would have.

A much better and legally safer approach is to pay all final wages due to that employee and then consider pursuing a separate claim against him for failure to repay the relocation bonus, if you determine that given the amount in dispute and other circumstances, that claim would be worth pursuing.