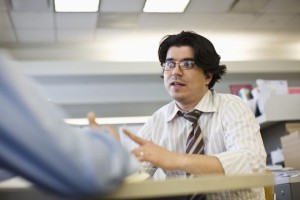 Some employees assume that unless they have proof of complaining about a particular labor law violation, the protections of anti-retaliation laws do not apply to them. However, as the US Supreme Court recently held in Kasten v Saint-Gobain Performance Plastics Corporation (2001), complains that are made orally are also protected. In that case, Mr. Kasten was employed as a plant worker. He claimed that he was fired in retaliation for complaining about the location of time clocks which prevented him and other employees from getting paid for the time it took to get from the area where they put on and took off their uniforms to the area where they worked. Shortly after orally complaining about this to his management, he was disciplined and fired. Mr. Kasten filed a retaliation lawsuit under FLSA section 213(a), which forbids employers from terminating any employee for “… filing any complaint”.  Interestingly, the court found “filing” to include oral complaints, if they are sufficiently clear.

Of course, in the vast majority of cases when the only evidence of complaining you have is your own word, the employer will deny hearing any such complaints from you 9 times out of 10. Therefore, if you didn’t memorialize your complaints in writing, it would really help to have some corroborating evidence of having that conversation, such as a witness-coworker, who was present during that conversation.