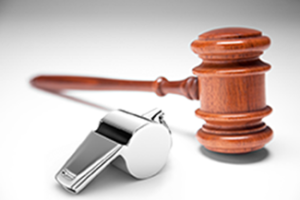 California Labor Code 1102.5 prohibits discharging an employee for disclosing an alleged violation of a statute of public importance to a government or a law enforcement agency. Such a discharge may be grounds for a claim of wrongful discharge in violation of public policy.
The following are examples of “whistleblowing” cases in which such a claim was upheld:
* Reporting to management that the company was not paying overtime wages due to certain of its employees.
* Reporting to governmental agency the employer’s improper billing practices with respect to governmental contract.
* Reporting to management that certain executives shipping promotional records were violatating laws prohibiting bribery, kickbacks, embezzlement and tax evasion.
* Reporting discrimination against women and minorities.
* Reporting health and safety violations by an employer.
* Reporting violations of consumer protection laws and immigration laws.

It’s important to note that an actual violation is not required for a legitimate whistleblower action. Under the code, an employee’s reasonable suspicion of violation is sufficient. In other words, an employee does not need to prove that his employer actually violated the law; it is sufficient if the employer fired the employee for reporting hi “reasonably based suspicion” of illegal activity.

An employee who has been subjected to a whistleblower retaliation at workplace and has been wrongfully terminated as a result of employment may recover a full measure of tort damages in an action for wrongful discharge in violation of public policy, including, in appropriate cases, damages for emotional distress and punitive damages.

One of the greatest powers of section Cal. Gov. Code section 1102.5 is actually in section 1102.6, which states that once the employee met his or her burden of showing that he or she was retaliated against for reporting what was reasonably believed an unlawful conduct, the employer has to prove by clear and convincing evidence that the adverse action taken against employee was not motivated by “blowing the whistle” but by other, legitimate reasons, such as downsizing or restructuring or employee’s performance issues. Legally “clear and convincing standard” is a high burden for an employer to prove in an employment case.